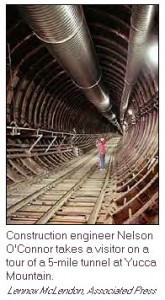 Preparations are being made by three Tri-City leaders to file a federal lawsuit stopping the Obama administration from eliminating the previously set in place plans to use Yucca Mountain, Nevada, a national repository for Hanford waste.  This is one of what is expected to be many lawsuits calling for the federal government to cease-and-desist abandonment of plans to use Yucca Mountain as a national repository for used fuel from commercial nuclear power plants and high-level radioactive waste from nuclear weapons production.

Tri-Citians Bob Ferguson, Bill Lampson and Gary Petersen had a letter delivered to the White House requesting a chance to have a dialogue regarding the issue.  Aiken County, S.C. has also filed a federal lawsuit as well because 13 states have weapons waste that by law must go to a national repository. Congress had previously designated Yucca Mountain as the national site for high-level waste, and that designation is in the law, and the administration is unilaterally changing the law.

If the plans are abandoned, Yucca would become a $10 billion hole in the ground, and it is believed that the decision is political rather than scientific . If Yucca Mountain used utilized, then Hanford waste could stay here indefinitely.