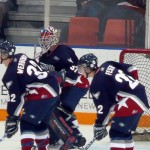 Do remember the fervor of the Tri-City Americans when they first came to the Tri-Cities in 1988? Do you recall the two young men that became household names here in town? Well Stu Barnes and Olie Kolzig, both went on and became NHL superstars yet maintained homes here in the Tri-Cities during their careers. Wednesday marked the 5 year anniversary of their ownership in the Tri-City Americans – who are now vying for the Western League Championship for the 2nd time in 3 years, and they’ve also taken the U.S. Division Championship title three times.  These two outstanding men, their coaches and front office staff have built an outstanding team over the years, provided them with trainers and high quality facilities to train and practice in – and all of that care and concern for the players has created an outstanding Tri City Americans team, and in turn, the community has become a huge fan base. Hockey in the desert sounds kind of funny, but here in the Tri-Cities we love our Ams!  Good luck boys and show ’em what you’re made of! We’re behind you 110%.